NORTHBRIDGE — Sign on the dotted line. That’s what Whitinsville Christian School senior Justin Vander Baan did on the morning of Wednesday, Nov. 13, putting his John Hancock on a National Letter-of-Intent (NLI) to attend Boston College next year and play basketball for the Eagles on an athletic scholarship. 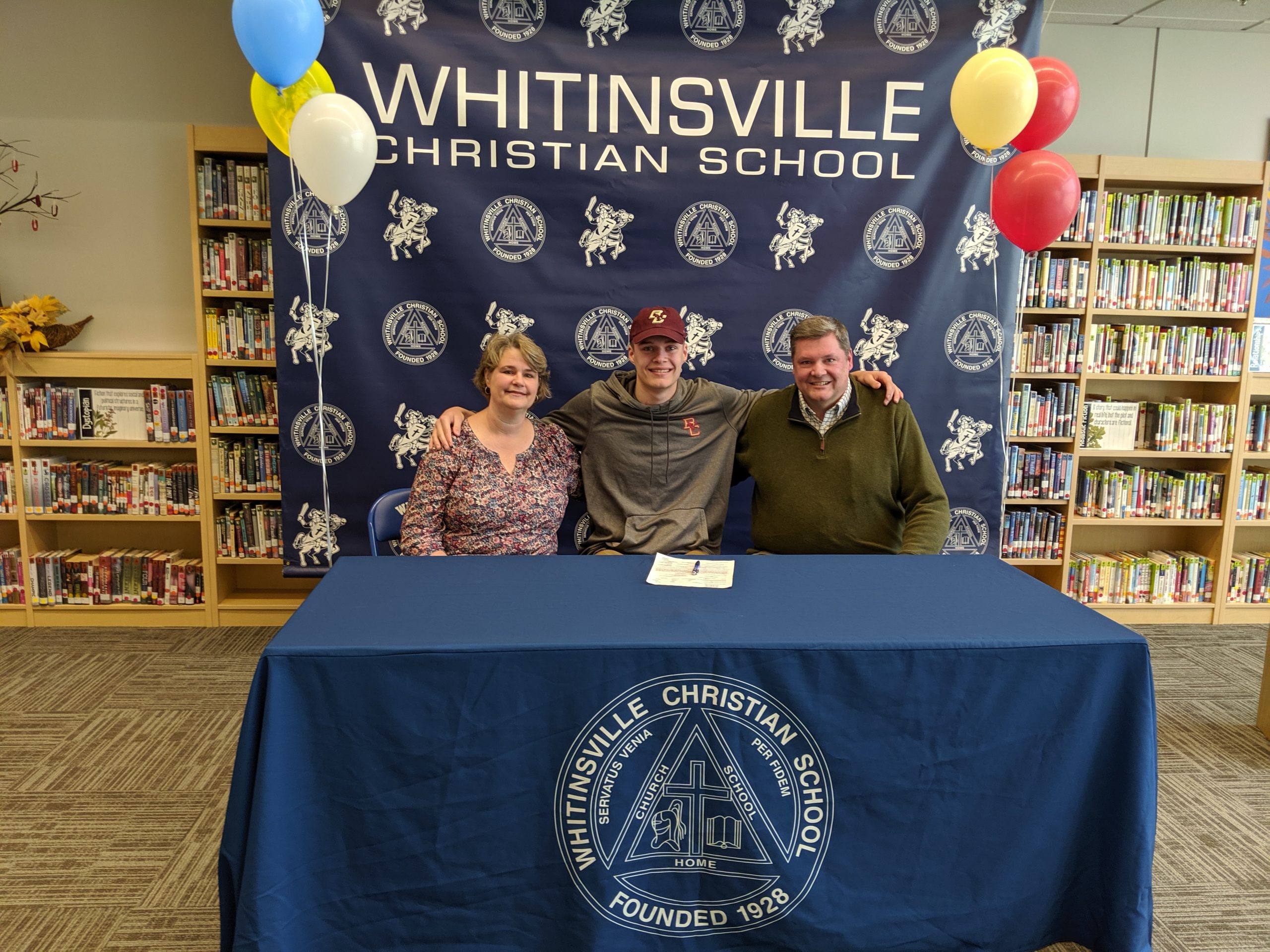 On top of the schools that officially offered Vander Baan a scholarship, more than 100 other Division 1 basketball programs expressed interest in getting the chance to offer him a scholarship.

Vander Baan averaged 14.8 points, 12 rebounds, and 4 blocks per game last year for the Crusaders, as he helped lead them to a 17-5 overall record and the quarterfinal round berth in the Central Mass. Division 3 Tournament, where they lost to the eventual champion, Dover-Sherborn Regional.

Before he signed his NLI, Vander Baan addressed a large crowd of teammates, fellow students, faculty and staff, some of whom have been with him since he first arrived at WCS for his first day of kindergarten.

“To the community of WCS…I appreciate all the teachers and everyone who has supported me throughout this journey,” Vander Baan said. “I also want to say thank you to my parents. You’ve helped me through this whole process, and you’ve raised me and made me into the kid I am today.

“I also want to say thank you to my grandparents for all their love and support, and thanks to my friends and my teammates, past and present,” Vander Baan continued. “Lastly, I want to thank coach [Brady] Bajema for all the time he’s put into me, the whole team and the whole program at WCS. He has a love for the game and love for the kids that that he mentors.”

Bajema’s first memory of Vander Baan came when the player was at summer camp and transitioning from the fifth to the sixth grade.

“I remember thinking, this kid is going to be really tall,” Bajema said. “He was really skilled at that point, too.”

Vander Baan said he selected BC for many reasons, not the least of which was the fact that Nik Popovic, the Eagles’ 6-foot11, 253-pound starting center, is graduating this year.

“The opportunity to step in and play and get good minutes in my freshman year was a big factor,” Vander Baan said. “I’m going to work all season and all offseason, so hopefully next year I’m prepared enough to have a role — probably not starting — but a role, and be able to [play] minutes my freshman year.”

Vander Baan was on the Eagles’ radar when he was a 10th grader.

“They actually came and watched me sophomore year. That summer they started recruiting me and they ended up offering me by the end of August,” Vander Baan explained. “They’ve believed in me throughout this whole process and saw potential in me to want to add me to their program.”

Other reasons Vander Baan picked BC included the level of education he will receive, the coaching staff, the fact they were one of the first scholarship offers he received, and the school’s closeness to the sleepy hamlet of Whitinsville, Vander Baan’s hometown.

The ride to BC from Northbridge should take about 68 minutes.

“Being so close to home was definitely a factor,” Vander Baan said. “The fact that my parents and grandparents will be able to come to practically any home game they want; that was a big thing.”